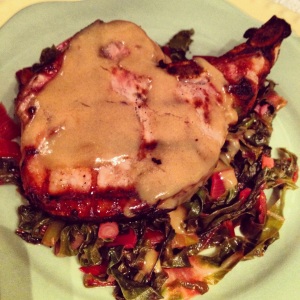 One of the ways in which I’ve managed to eat healthier is by, whenever possible, eating locally-produced foods from suppliers that I know or am familiar with. This means I’m eating fewer processed foods, and a lot more foods grown with sustainable farming practices. I’m fortunate that there are a lot of really good local suppliers (and to have good restaurants around that develop relationships with local suppliers so that I’ve become familiar with some I might not otherwise know about). Recently I’ve discovered Thompson Farms, which sells pork that is free-range and pasture raised (without hormones or antibiotics). I can buy it at Whole Foods (where it receives their highest animal-welfare rating), and like the quality of the meat.

Usually when I eat pork, I cook a pork tenderloin or boneless loin chops, but I decided to branch out and try their bone-in pork loin chops. It’s already pretty warm here in Atlanta, so I wanted to grill them. I’ve never grilled pork chops before, so I turned to the internet for some suggestions. Uniformly, brining the chops was recommended. I don’t have a strong grasp of the science, but the idea is that by marinating the pork in salted water (with other herbs and spices), the salt helps the liquid to penetrate the meat. The water content in the meat is significantly increased, making it less likely that it will dry out when cooking. Most brines also call for a little sweetener to counteract the flavor of the salt. There was a lot of variation in the recommended brining time. I saw some recipes that insisted that anything longer than two hours might ruin the meat, and others that suggested brining times of 12-24 hours. In the end, I opted for 12-hours, but when I do this again I think I’ll only brine for 2 or 3 hours so that the meat is a little less salty.

I received a nice assortment of greens in my CSA vegetable box this week, so I cooked up some chard and beet greens, then served the pork over that. I usually make a pan-sauce with the pork drippings. That wasn’t an option since I grilled the pork, so I just made up a simple sauce from chicken broth, dijon mustard and a little maple syrup. The slight sweetness of the sauce off-set some of the saltiness of the pork and was a good combination. (I also had a baked sweet potato with the meal.)

Allow the salt and sugar to dissolve, then add the pork chops to the bag:

Pre-heat the grill to high-heat. While the grill pre-heats, start the greens and the sauce.

Greens (Note: I used about 12-ounces of fresh local chard and beet greens – mostly chard. Separate the stems from the leaves from the greens before chopping and store them separately. You’ll cook the stems first since they’ll take longer to cook and then add the leaves at the end.)

In a large non-stick skillet, heat over medium-high heat until shimmering:

Then add to the pan:

Reduce heat to medium and sautee, stirring frequently 2 or 3 minutes. Add to the pan:

Cook for about one minute and then add to he pan:

Cook over medium heat, stirring occasionally, for about 10-15 minutes until the stems and onions are very tender. Then add to the pan:

Toss and cook for another 5-10 minutes until the greens are very wilted and the liquid is mostly absorbed.

In a small saucepan combine:

Whisk together and simmer over medium-low heat until thick.

Once the grill is pre-heated (and while the greens and sauce cook), remove the pork chops from the marinade and rinse very well and pat dry. You want to remove as much surface salt as possible before grilling. Place on grill over high heat and cook for three-minutes per side to sear. Reduce heat to medium and continue to cook, checking to see if they’re done after three more minutes per side. It may take longer, depending on the heat of your grill and how thick are your pork chops. They should cook to an internal temperature of at least 145-degrees. Remove from heat, and let stand for at least 5 minutes before serving (the temperature will continue to rise during this time). Serve over the wilted greens, and spoon sauce on top.