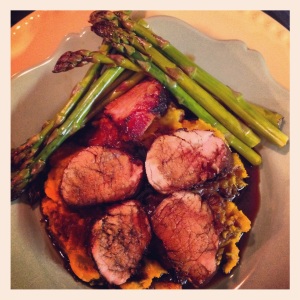 I just returned two days ago from a trip to Spain. On the long flight back I sat next to a man who was returning from Portugal. My first trip through Western Europe started in Porto and the Douro Valley, so we passed some time exchanging stories about the cities, people, food, wine, and the port. I thought about this conversation when I was planning dinner and deciding on a sauce for the pork tenderloin I was going to grill.

I often like fruit served with pork – two of my favorite preparations are really simple: just served with apples or a mango salsa.   Even though this recipe doesn’t have fruit, the port used in the sauce has a nice fruity taste which paired well with both the pork and sweet potatoes. I kept the sauce really simple: reduced port and balsamic vinegar, then stirred in some honey and a little soy sauce to offset the sweetness a little bit.  I served it over smashed sweet potatoes that were equally easy to prepare: steamed them with water until they were soft enough to smash with a wooden spoon, then stirred in a little cinnamon and port.  All together dinner took only about 30 minutes to prepare (after the pork had marinated).

Place in a large zip-top bag:

Allow to marinate for at least 1 hours (or as long as overnight).  Remove pork from the marinade and place on a (pre-heated) grill over high heat. Grill for 12-16 minutes  (depending on the size of the tenderloin and the heat of your grill), turning several times, until it reaches an internal temperature of 145 degrees. Remove from the grill, tent with foil, and let it stand for at least 5 minutes before serving.

When you’re pre-heating the grill start the sauce. In a small saucepan, combine:

Simmer over medium heat, stirring frequently, until it is reduced to 1/4 cup. Take off heat and stir in:

Place in a large heavy-bottomed skillet with a lid:

Heat until it shimmers, then add:

Cook over medium heat and stir to coat the sweet potatoes, then add just enough water to cover the bottom of the pan to a depth of 1/4 inch. reduce heat to medium low and cover. Simmer the sweet potatoes, stirring occasionally and adding more water as needed to keep them from sticking to the bottom of the pan.  When they are soft enough to smash with the back of a wooden spoon (about 15 minutes), smash them.  Stir in:

Continue to simmer for another 5 minutes, stirring frequently to prevent from sticking or burning.