Winter Squash with Quinoa and Spinach 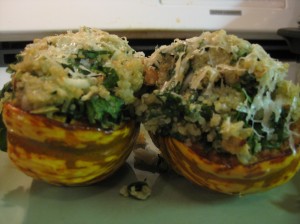 One of the things I love about winter produce is winter squash – acorn, butternut, spaghetti – I’m not sure I’ve tried a winter squash I didn’t like.  It’s funny that I love winter squash so much, because I’ve never liked summer squash. In my CSA box I found a squash that I wasn’t familiar with – it looked like a small pumpkin, but more golden-yellow than orange. Turns out that it’s a Carnival squash. 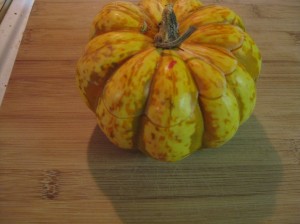 There was another item in my vegetable box this week that I’ve never used or eaten before: jerusalem artichokes (also known as a sunchokes).  They look a lot like fresh ginger, and despite the name they are not related to artichokes. 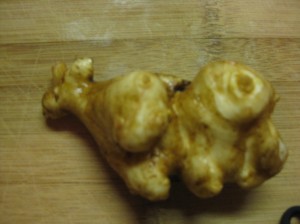 A web-search informed me that they can be prepared almost any way imaginable, including eating them raw (peeled or unpeeled).  I tried one raw and really liked it – very crisp and a little bit sweet. It reminded me a lot of jicama.  I also found out from a friend that they cause gas, so she advised me not to use too many at a time.  I appreciate good, honest advice.

I decided to roast the squash, then stuff it with quinoa for a healthy, vegetarian meal.  I received more winter spinach in this week’s vegetable box, so I thought adding spinach (and the jerusalem artichokes) to the quinoa would taste good, and add iron to my dinner.  (The combination of winter squash and spinach should be especially good, since winter squash is high in Vitamin C, which increases the absorption of iron from the spinach.) While the squash takes a while to roast, this recipe requires very little hands-on time. Using quinoa makes this a really high-protein vegetarian meal. Quinoa is one of the most complete non-meat-based protein sources.

Preheat the oven to 400 degrees. In the meantime, cut the squash in half lengthwise, then remove the seeds and stringy flesh (reserve this to separate out the seeds while the squash roasts).  Sprinkle the inside of the squash with:

Place in a shallow baking dish, cut side down, and roast until the flesh is tender when pierced with a sharp knife – about 40 minutes or so, depending on the size of the squash.

While the squash is roasting, separate the squash seeds from the stringy flesh. You can do this under running water, but I prefer to work without rinsing the seeds – the residual flesh that coats the seeds helps salt to stick to them when roasting. It takes a little more time, but I think the end result is worth it.  Spread the pumpkin seeds on a foil-lined, rimmed, cookie sheet and put in the oven with the squash.  Bake, stirring occasionally, until the seeds are toasted (you might here a few pop when they are getting done).

In the meantime, combine in a small saucepan:

Bring the water to a boil, then cover and reduce heat to simmer for about 15 minutes, until most or all of the water is absorbed. You know quinoa is done when a little thread (or tail) emerges. If there is still water in the sauce pan, you can strain it using a fine-mesh strainer.

When the quinoa is done cooking, remove the rosemary and stir in:

When the flesh is tender on the squash, remove it from the oven, fill the cavity with the quinoa mixture, then top with:

Place the squash back in the oven for 5-10 minutes until the quinoa is warmed up and the cheese is melted.